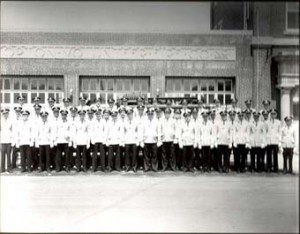 On May 18, 1909, the organization became known as the Topton Volunteer Fire Company No.1 of Topton, PA. And a new Constitution and By-Laws were adopted. Equipment during this period consisted of an 1892 hand drawn hose cart.

By August 25, 1915, the need for re-organization was held by the citizens of Topton for the purpose of creating the present Topton Volunteer Fire Company #1. On September 20, 1915 a new Constitution and By-Laws were adopted. The company was incorporated under the laws of the Commonwealth of Pennsylvania on May 17, 1917.

The first piece of motorized apparatus was purchased in August of 1918 and consisted of a Hahn Chemical engine. The membership of the Topton Volunteer Fire Company No. 1 was 150 in 1918.

In 1926 a new American LaFrance 750 gpm pumper was purchased. This apparatus served the company until the spring of 1950.

The Topton Volunteer Fire Company No. 1 along with the Topton Volunteer Fire Co. Beneficial Association was located at the corner of Franklin St. and Home Ave. until January of 1940 when the former P.O.S. of A. hall located at the corner of High and Cherry Streets was purchased. An engine room for three pieces of apparatus and Police Deptartment office was built by the Borough of Topton. The apparatus building was dedicated on November 15, 1941.

This site served as our home up until the spring of 1986 when construction began on our current station located along State Street just outside the Borough of Topton in Longswamp Twp. We moved into the new quarters in January of 1987 and the building dedication was held on June 4, 1988.